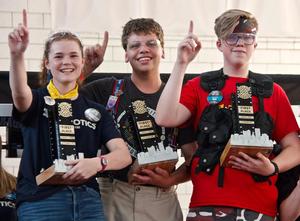 Franklin Regional’s (FR) Team 4150, along with their robot named Curiosity, were part of a three-school alliance that captured a first-place win. FR joined 18 other teams from Pennsylvania, New York, Ohio, and West Virginia at the event.

2019 proved to be a banner year for FRobotics Team 4150. The group was the 2019 WOW Robotics Alliance competition champions, which qualified them to compete at the 2019 FIRST World Championships.